"And ye shall know the truth, and the truth shall make you free." John 8:32

How Important is a Good Foundation? Part 5 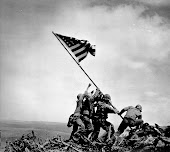 And Shall We not Raise the Flag of Truth?